The Dodge Momentum Index fell 2.7 per cent in January to 152.5 from the revised December reading of 156.7, snapping a four-month streak of gains. The index, issued by Dodge Data & Analytics, is a monthly measure of the first (or initial) report for non-residential U.S. building projects in planning, which have been shown to lead construction spending for non-residential buildings by a full year. The decline in the overall index was the result of an 11 per cent drop in the institutional component, more than offsetting a 2.7 per cent gain in the commercial component. A similar pattern exists when comparing year-over-year growth in the components of the index. The institutional component was down 7.4 per cent when compared to January 2019 while the commercial component was 17.4 per cent higher than a year ago. These conflicting trends pushed the overall index up 7.1 per cent from January 2019.

Charles E. Tyson has been named interim president and principal executive officer of Lumber Liquidators. He is the company’s chief customer experience officer. Tyson will share the duties of these positions with Mary A. Walsh, chief financial officer. Dennis R. Knowles, formerly president and chief executive officer, has resigned. The company is searching for a replacement.

Sales Up At Fastenal

The International Housewares Association (IHA) will not open the ‘International Sourcing Expo’ at the ‘Inspired Home Show 2020’ in response to concerns about the Coronavirus outbreak in China. The IHA consulted with Chinese pavilion organizers and exhibitors and made the decision “to protect the health, safety, and well-being of the industry from concerns about exposure to the virus,” says Derek Miller, president of IHA. The rest of the home show will continue as planned. It takes place March 14 to 17 in Chicago, IL. For more information, visit ‘Inspired Home Show 2020’

Acklands-Grainger is rebranding as Grainger and aligning under one brand in North America. The Canadian division will be referred to as ‘Grainger Canada.’ The legal name will stay the same – Acklands-Grainger Inc. – so no changes will be required to existing contracts. The company says it will also expand its Canadian services by increasing its product selection, integrating faster operational processes, and providing more insights into industry trends. It will optimize its customer service centre and add a dedicated service team as well as optimize its online ordering and shipping services. This comes three years after the company announced it would restructure its Canadian operations, which included plans to shutter 59 of its 144 branches.

Housewares Store Inventory To Be Auctioned Off

Thornhill, ON-based Cayne’s The Super Houseware Store is closing it’s doors. All of the inventory of the company’s 55,000 square feet of retail space and warehouses will be auctioned off online, including its warehouse equipment, store fixtures, and office furniture. The store was known as a go-to place for deals on small appliances, kitchen gadgets, and housewares for 33 years. Late last year, the owners announced their decision to wind down the store operations. For more information, visit Cayne’s auction

Rory Moss will be president, ROCKWOOL North America, effective April 1. He joined the company in 2007 and is currently managing director, ROCKWOOL Nordics.

ASSA ABLOY had net sales of SEK24,946 million for the fourth quarter of 2019, an eight per cent increase over net sales of SEK23,167 million in the fourth quarter of 2018. The company says it had strong organic growth in the Americas, good growth in its global technologies segment, and stable growth in its entrance systems. EBIT was SEK4,047 million for the quarter, also up eight per cent over the year-ago quarter, which had EBIT of SEK3,746 million. Operating margin remained flat at 16.2 per cent. Net income was SEK2,767 million, up seven per cent compared to SEK2,588 million last year.

The Canadian Federation of Independent Business (CFIB) is urging the federal government to put an end to excluding family members from the lifetime capital gains exemption when business owners sell their companies to family members. The recommendation was part of the CFIB’s list of small business owners’ top priorities for the upcoming federal budget. According to CFIB research, 72 per cent of small business owners plan on exiting their business within the next decade – representing a potential transfer of assets of more than $1.5 trillion. Many wish to do this by selling their business to their children. “We think that making it easier for small business owners to sell to their kids is something that all the parties can get behind – and it would be a big win for entrepreneurs,” says Dan Kelly, president of CFIB. The CFIB also urges the government not to raise the capital gains inclusion rate. It warns that such a move would be “seriously damaging” to small businesses, particularly business owners who are looking to sell or retire. Raising the rate would significantly decrease the retirement income of small business owners, many of whom rely on the lifetime capital gains exemption, which would be directly affected by such an increase. In addition, CFIB also says that rising CPP premiums are making it more difficult for entrepreneurs to hire and retain employees and called for the elimination of credit card processing fees on GST and HST.

‘Clean machine’ and ‘together in isolation’ are two trends set to impact the global household care market over the next decade, says Mintel, a market research firm. Clean machine is about the rapid advancement of technology that will enable consumers to create hyper-personalized approaches to managing their home and their health. “Over the next 10 years, expect to see home automation become commonplace, with new capabilities adopted to meet specific consumer needs. At the same time, some markets will see a backlash against the growing dependence on machines driving consumers to rediscover a sense of community,” says Jamie Rosenberg, senior global analyst. Together in isolation reflects the evolving consumer views about the world that will lead to changes in what they expect from sustainability and corporate responsibility over the next decade. This trend allows homecare brands to find success by creating products and services that contribute to making the world a better place.

Stair system manufacturer L.J. Smith has launched a series of installation videos to its library of resources. The 12 new videos provide information for contractors, builders, and homeowners on how to install L.J. Smith’s interior stair systems. Additionally, the company has cable system and IronPro iron baluster fastener installation videos on the site, for a total of 14 videos. The manufacturer also offers a full array of support materials on its website including information on finishing tips, building codes, ordering guidelines, and product drawings. Product brochures and an inspiration gallery are also available. For more information, visit L.J. Smith

The Ontario Chamber of Commerce (OCC) has partnered with BarterPay Canada Inc. to bring the BarterPay trading platform to members of the Ontario Chamber Network. Through the platform, small- and medium-sized businesses can obtain a wide variety of goods and services that they need by trading excess, slow-moving inventory or idle time instead of using cash. Members of participating local chambers of commerce and boards of trade will be given exclusive benefits such as reduced activation fees, special promotions, and access to BarterPay Small Business Barter Loans at zero per cent interest. BarterPay converts the value of traded goods and services into TRADEdollars (at retail value) which allows the business owner to extract the actual things they need from the network versus trading directly one to one. In addition, BarterPay It Forward, a separate charitable foundation, provides a unique opportunity for small businesses to contribute to community charities and create social impact with the TRADEdollars they generate instead of having to dip into their cash.

ODL, Inc., a building products supplier of decorative and clear doorglass and entry treatments, has launched more size options in ZEEL, its doorglass frame offering. ZEEL is the result of market research conducted by ODL that revealed a gap in the doorglass frame market and a need for a sleeker, more streamlined option. The frame offers a clip system that eliminates the need for screws and is made from FiberMate Plus, a doorglass frame material made by ODL that has a higher percentage of fibreglass to increase durability and reduce water seeping. The frames are now available in four new sizes – 22- x 48-inches, 20- x 64-inches, 8- x 80-inches, and 22- x 80-inches – and can be used in conjunction with most doorglass, including the clear and decorative options offered by ODL. These additions now complete the line with all sizes across Classic, Deco, and Blinds-Between-Glass (BBG) doorglass.

As part of its Innovation Solutions Canada (ISC) program, the Government of Canada is collaborating with small businesses to reduce pollution and help create a greener, more sustainable environment. It will invest $300,000 in the first phase of the Biofoam Insulation Challenge, aimed at developing greener insulation products from forest residues. The investment will be split between two recipients whose concepts are comparable in price and performance to traditional insulations, are bio-based (predominantly derived from domestic forest residue), fully recyclable, and generate fewer emissions during production. The recipients are Sherbrooke, QC-based Mecanum Inc. and London, ON-based Western Maple Bio Resources Inc. (WMB). Mecanum is developing a thermo-acoustic foam insulation panel using a minimum of 60 per cent kraft lignin, a wood pulp component used to generate energy. WMB is using pine sawdust and forest residue to develop a biofoam made with more than 70 per cent bio-content.

The global smart home market revenue is expected to reach $158 billion in the next four years, at a compound annual growth rate (CAGR) of 15 per cent, says a report by PreciseSecurity.com. The global smart home ecosystem is set to continue its rapid expansion, mostly due to the speed of 5G implementation. Recent IoT investments by Google, Apple, Amazon, and Alibaba have also transformed the landscape noticeably, providing opportunities for various companies. In comparison, the global smart home market was worth $43.4 billion in 2017. Since then, the industry revenue doubled and is expected to reach $91 billion value this year. Smart home technology provides homeowners security, convenience, energy efficiency, and comfort by allowing them to control smart devices through smart home apps. Household penetration is forecast to reach 9.3 per cent this year and continue growing to 19.3 per cent by 2024. Smart appliances will generate the largest profit, followed by control and connectivity devices.

Desjardins is now the majority shareholder of Reno-Assistance, a company that pairs clients with contractors for large-scale residential or commercial renovation projects. Desjardins is also supporting the company's plan to increase its footprint outside of where it currently has most of its business – Greater Toronto, ON, and Greater Montreal and the Quebec City region in Quebec. For the foreseeable future, Reno-Assistance will remain open to the public but, Desjardins hasn't ruled out the possibility of capitalizing on synergies with different entities in its organization.

Julia Deans will be president and chief executive officer of Habitat for Humanity Canada, effective February 24. Most recently, she was the founding CEO of the Canada Children’s Literacy Foundation.

Beacon (formerly Beacon Roofing Supply) had net sales of $1.68 billion for the first quarter of 2020, a decrease of 2.7 per cent over net sales of $1.72 billion in the first quarter of 2019. The sales decline was mainly influenced by decreased hurricane-related demand compared to the prior year. Residential roofing product sales decreased 4.1 per cent, non-residential roofing product sales increased 0.2 per cent, and complementary product sales decreased 3.1 per cent compared to the prior year. The company had a net loss of $23.4 million for the quarter compared to a net loss of $0.9 million last year. Adjusted EBITDA was $94.3 million compared to $121.7 million in 2019. 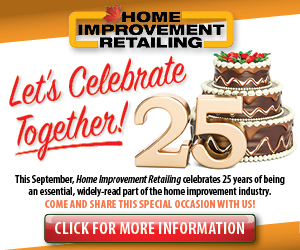 View news archive for items before 2012.

Subscribe now to receive industry news delivered to your inbox every business day.

You may also qualify to receive a print subscription of Home Improvement Retailing free of charge - a $79 value!